OnlyFans Reverses Decision? Is This Tumblr All Over Again? 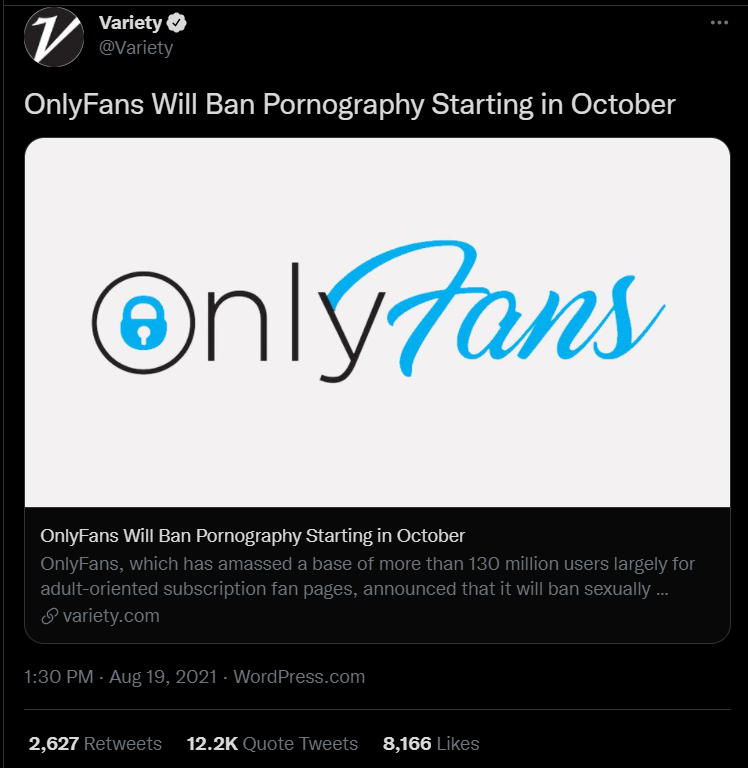 And this week, they announced that they suspended their decision…

There’s so much to touch on here. First, and most importantly, is the uncertainty this leaves the creators of OnlyFans that built the brand.

OnlyFans allowed Courtney to quickly go from a teacher’s salary to a six-figure income giving her a way to support her three children, buy a house, and provide security for her family. But with OnlyFans banning content from her and the platform’s earliest creators, this is all falling apart faster than it began.

Many sex workers who built OnlyFans into what it is today have already pointed out that this is just a suspension, not a cancelation. While OnlyFans claims to be inclusive for all creators, they have made no claim of actually changing their original plans to ban content.

OnlyFans has its reasons for disrupting the lives of thousands of creators, on whose backs it built its success:

Not a very sympathetic reason…

It’s easy to be mad at OnlyFans for this, but the blame is not all on them. While they are the face of this callous action, the ones pulling the strings are the banks and payment providers, like Visa and Mastercard, that allow them to pay creators.

According to The Verge, founder and CEO Tim Stokely,

When it boils down to issues over centralization or censorship, in both human expression and financial inclusion, the solution always seems to point towards blockchain and crypto.

As more decentralized platforms grow on open, censorship-resistant blockchains, they will be able to absorb the market demand for free, permission-less human expression. The fly-wheel happens when these networks reach a level of autonomy and decentralization that allows them to operate themselves while being guided by its core community.

This is the ultimate vision for MintGate: a decentralized platform with exclusive, “token-gated” content, operated by its biggest contributors and sustained by their greatest supporters. This should be the goal for every web3, community-centric venture. But it’s a long path to that world and we need your help to reach it.

As more people enter crypto, the chains of the legacy system will be unable to restrain these new self-sustaining communities, operating globally and aligned by shared values with their own censorship-resistant currencies.

Whether you are an individual creator, studio, or brand.